King’s students were thrilled to attend the Chester Schools Together Diversity and Inclusion Conference, in partnership with the Outreach Team of University of Chester.

The event, held at The Queen’s Park Campus, brought together more than 80 students from four Chester schools, to work in mixed groups and increase their knowledge and awareness of different issues, before agreeing campaign ideas to tackle each area.

A small working group of Sixth Form and Year 11 students from each of the schools met in March and agreed the following four areas of D&I for the conference to focus on:

The conference began with students enjoying a talk and Q&A from an invited speakers in the campus’s lecture theatre, before they broke off into four mixed school groups and were given one of the four strands to discuss. 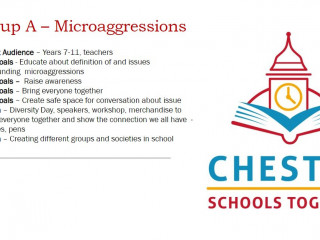 Each team was allocated a £1,000 budget to create an awareness campaign for their area, which they worked on throughout the afternoon before presenting their ideas.