Home > About Us > Partnerships

Chester Schools Together is a new partnership between The King’s School, Blacon High School and Bishops’ Blue Coat High School.

The Partnership launched its first joint project with a series of Saturday Masterclasses held at King’s, Blacon High School and Bishops’ Bluecoat High School over three consecutive weekends with mixed groups of students from each school, working across the three sites.

The Masterclasses had an overall theme of ‘creativity’ and projects included a collaborative sculpture, a student newspaper and a virtual reality history learning resource.

The Saturday Masterclasses project aims to bring together students from three secondary schools for a variety of exciting learning experiences and to encourage collaborative working and to challenge students’ misconceptions or concerns about working and learning alongside students from different schools and/or socio-economic backgrounds.

More than 40 Year 7 and 8 children attended the three sessions and feedback was overwhelming positive.

“I am very pleased as I feel I produced something amazing.”

“It was something I wouldn’t have usually done, so I am proud.”

“It was fun meeting new people and seeing things in a different perspective.”

“One of the best bits was learning how to use new technology that hasn’t been available to me.”

Q&A session with the Children’s Laureate

King’s welcomed more than 100 pupils from four local schools to take part in a talk and Q&A session with the Children’s Laureate, and creator of Charlie and Lola, Lauren Child.

This event was a great chance to share the opportunity of hearing from and meeting a high profile author, and to learn more about the creative process and inspire a passion for literature in younger pupils.

Our School Librarian runs a busy and high profile programme of visiting authors and associated literature events and seeks to involve the local school network where possible. Susannah Townsend and Erica Sanders spent the the day at King’s, teaching a group of youngsters some key hockey skills before conducting a Q&A session in the Vanbrugh Theatre.

All of the pupils had a fantastic morning improving their hockey skills and learning top tips from Susannah and Erica before the engaging Q&A session. This was organised in conjunction with Investec – the current sponsor of The Women’s England Hockey League We were delighted to welcome more than 160 children from local schools to take part in an annual Invitational Tournament at King’s.

The pupils, from ages 9-11, were invited to compete in netball and football matches throughout the afternoon. Students showed great determination and displayed excellent sportsmanship. Secondary students from more than 20 local schools were invited to a Living Autopsy Event at King’s as part of National Pathology Week.

Working in partnership with pathologists, laboratory scientists and schools across the UK, the RCoP programme of events and activities aims to engage people of all ages, and improve public awareness and understanding of how pathologists and scientists diagnose disease.

Students were able to speak to members of the NHS about careers in and related to pathology and then enjoy a ‘living autopsy’ lecture, including a Q&A. 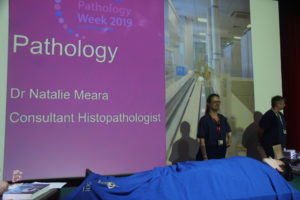 These investigations allowed pupils to investigate the crime scene and work out who was the thief! King’s funded (£25 per pupil) a number of places for local secondary schools.